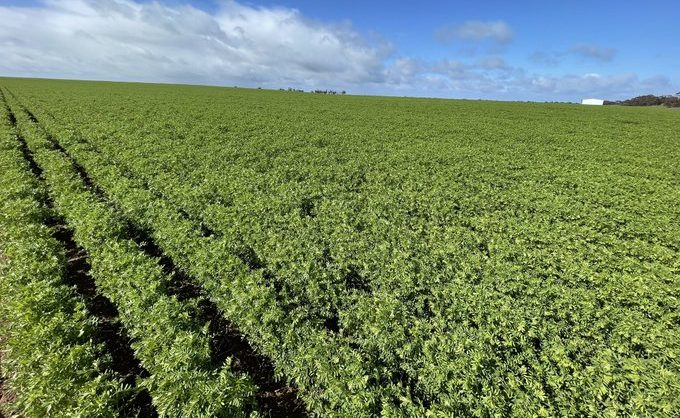 THE prospect of a big Australian and Canadian lentil crop, and the wind-back in Egypt’s buying of faba beans has seen prices for both pulses fall in the past month.

As current-crop mungbean stocks deplete, growers in an expanded area in New South Wales are considering planting the summer pulse to make use of country left fallow during the rain-affected window for winter-crop seeding.

New-crop markets continue to shape up ahead of the start of the winter pulse harvest which is expected to kick off in October in Central Queensland with chickpeas.

With spring only one week away, winter pulse crops in Australia are generally faring well in all states bar NSW, where ongoing wet conditions have thwarted crop development and prompted disease concerns in many districts.

Prices for chickpeas have dropped in the past month to reflect ongoing difficulties in the container trade which is impeding the amount of business that can be done to Pakistan.

Chickpeas with minor weather damage are trading at $400-$420 per tonne delivered up-country container packer, down around $20/t from last month.

Severely defective chickpeas are trading at closer to $300/t, and going into the domestic poultry and stockfeed markets.

On new-crop, CQ chickpeas are trading at $550/t in the Gladstone and Mackay track markets for Oct-Nov delivery, ahead of the bulk new-crop shipping program ex CQ starting in November and bound for Bangladesh.

“There is some grower selling, and it’s forming a market, but the bulk of chickpeas is always traded at harvest,” Mr Dubey said.

He said CQ being predominantly a grower of the desired Kyabra variety was helping the forward market develop.

“CQ fits the bill for what Bangladesh wants.”

He said logistics concerns tied to the difficulty of getting containers into Sydney’s Port Botany by rail, and then to markets beyond South Asia, where hampering current-crop sales.

“Going to Egypt or the Middle East, containers are so scarce and frightfully expensive.

“On Pakistan, containers are problematic and expensive, but we are seeing availability.

“The good thing is Pakistan’s demand is continuing.”

“With the La Niña hanging around, and day degrees being down, it’ll be October I’d say before we see the first chickpeas come off in CQ,” Mr McIntosh said.

“The ones up there are looking good, but phytophthora is of concern where it’s really wet.”

Prices for faba beans have fallen in the past month to around $390/t delivered port as bulk cargoes continue to pop up on the stem into October.

This represents a drop of around $100/t since mid July.

“The crop was once again a lot larger than even the largest estimates.”

New-crop markets are starting to develop on offers of $450/t delivered container terminal in Brisbane and Sydney for December-January, and $400/t delivered port.

“Egypt overbought and, as with many other countries, is having a shortage of US dollars, which is making it hard for importers.”

Aphids are of minor concern in the northern NSW and southern Queensland bean crops, where many crops are now in flower, and wet conditions are prevalent in much of NSW.

However, the NSW crop seems to be handling wet feet.

“It feels like another big crop is coming here, in addition to a Canadian crop back to a normal size.

“As usual, market direction will depend on the depth of Indian demand.”

New-crop values are shaping up at around $685/t delivered port, and bulk cargoes to India are booked to continue into September, when new-crop Canadian shipments will be on the water.

ETG southern pulse trader Todd Krahe said lentil prices have been on a “pretty slippery slope” in the past month or so.

“It’s the outlook of a good crop both here and in Canada.”

Mr Krahe is based in Victoria’s Wimmera, where lentils for prompt delivery to container packers are quoted at around $660/t, down from $800 or so two months ago.

“Crops look fantastic around here at the moment.”

Canada’s earliest lentil crops are now being harvested, and volume is expected to be hitting the bins by mid-September.

“When that happens, we usually see a sharp price drop here; that might have already happened.”

“Now we’re seeing a bit more traction on new-crop interest as growers get more confident in the season, but if prices continue to drop, that might change.”

Mr Krahe said the gloss could well disappear from yield prospects if coming weeks turn out to be tough ones.

“It only takes a frost at the wrong time, or a heatwave of 30-plus degrees with a hot northerly wind when the plant’s not ready for it.”

He said the forecast for a wetter-than-normal spring has seen many Wimmera growers stock up with fungicides in case spraying is required in coming weeks.

While Wimmera crops are well positioned with subsoil moisture, he said Mallee crops could do with some rain to consolidate yield prospects.

The reduction in offerings from Australia is matching the more subdued interest from China to keep prices static in thin trade.

At Dalby on the Darling Downs, Deacon Seeds general manager Mark Schmidt estimates only 10-15pc of the Australian crop remains unsold, which was a desirable position ahead of new-crop becoming available in April-May.

“We’ve always wanted to market over a 12-month period.”

“China’s slowed down in its buying, with only a very small amount going to other markets.

“At the moment, China’s got a big stockpile and they’ve gone quiet.”

Current-crop manufacturing-grade mungbeans are trading at around $1100/t, steady on last month, with the higher processing grade almost impossible to find.

Mr Schmidt said focus was turning to new crop, and prices were showing no indication of softening from the $1000-$1300/t range covering the three standard grades of manufacturing, processing and No. 1.

Indications are that mungbeans are attracting grower interest from as far south as the Central West of NSW, where growers were unable to complete their winter-crop planting due to excessive rain in May and June.

This is expected to add to area from established growers in northern NSW, the Darling Downs and CQ.